The death toll from flash floods in Indonesia and neighbouring Timor-Leste rose to at least 100 on Monday as authorities warned of more danger from looming extreme weather conditions until 9 April.

Tropical Cyclone Seroja, packing heavy winds, dumped heaps of rain on islands stretching from Flores Island in Indonesia to Timor-Leste and is now moving towards Australia.

Dramatic visuals from the Southeast Asian nations showed a huge iron bridge being swept into a torrent of water, buildings washing away and houses collapsing in gushing floodwaters.

In Indonesia alone, at least 73 people have died with another 70 missing, while at least 27 people died in Timor-Leste. More than 400 people have been displaced in Jakarta, officials said.

Timor-Leste is a small island nation, between Indonesia and Australia, with a population of 1.3 million. "The mud and the extreme weather have become a serious challenge and the debris piling up has hampered the search and rescue team," Raditya Djati, spokesperson of Indonesian Disaster Mitigation Agency told reporters.

"We suspect many people are buried but it's not clear how many are missing," another official from East Flores disaster agency said.

Most areas in Indonesia will have probably experience extreme weather between 3 April to 9 April, the Indonesian National Board for Disaster Management Agency (BNPB) said citing a report by the country's meteorological agency.

The disaster agency warned more downpours are expected over the next day and there was a threat from offshore waves as high as 6m.

Rescue work was hampered by broken bridges and damaged roads after flooding and landslides ravaged the transport system, restricting the movement of heavy equipment and machinery.

Deputy head of the East Flores government, Agustinus Payong Boli, said evacuation work was halted as the storm was still raging while prohibiting the movement of machinery to the affected site.

In Lembata, one of the worst-affected areas where at least 20 people died, authorities said bodies could have been washed away to the ocean.

An eyewitness, Basir Langoday, said he heard loud screams calling for help after a flash flood hit Lembata, an island east of Flores.

"There were four of them inside. Three survived but the other one didn't make it," Mr Langoday told reporters. He said the fourth man fell to his death in raging waters after saying he could hold on no longer.

Indonesian president Joko Widodo expressed condolences over the devastation caused by the floods and assured people of relief efforts.

"I understand the deep sorrow suffered by our brothers and sisters because of this disaster," he said in an address to the nation. "I have ordered for disaster relief efforts to be conducted quickly and well, for example for health service assistance, availability of logistics and basic needs for the displaced and the reparation of infrastructure."

Destruction and deaths by flash floods are not uncommon in Indonesia, where the government said the country has seen 185 natural disasters in just first three weeks of 2021. 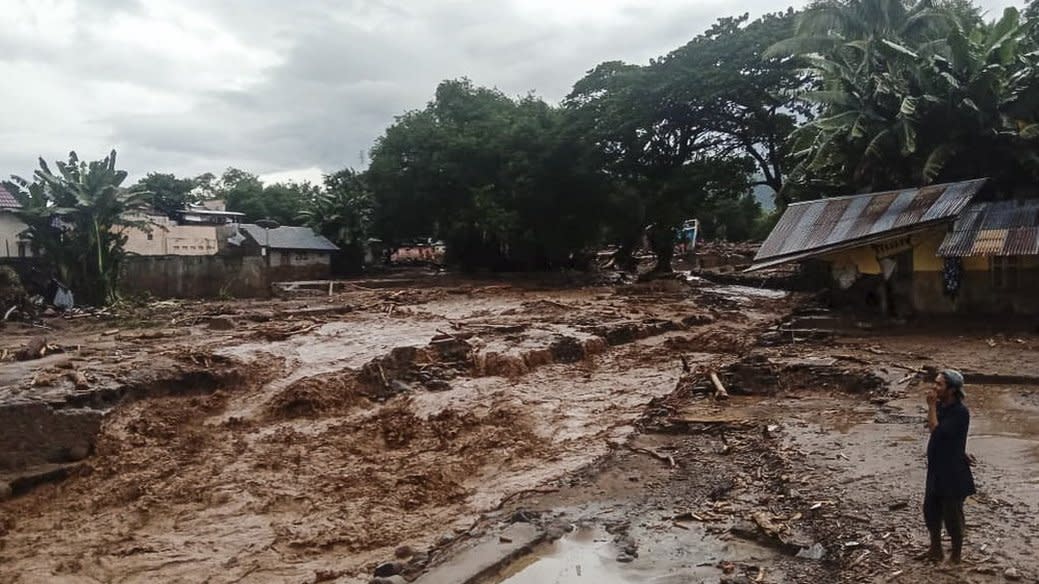 About 166 people died in such incidents in January 2021 alone, compared to 91 deaths during the same period in 2020, reported ABC news.

Meanwhile, residents in Western Australia have been warned about Tropical Cyclone Seroja, strengthening and heading towards the nation from Indonesian waters. Seroja packed winds of up to 100km/h and would gain more strength moving towards the Australian coast.

It could become a category 3 severe tropical cyclone by Wednesday and category 4 later in the week, meteorologist Joel Pippard told 9News.